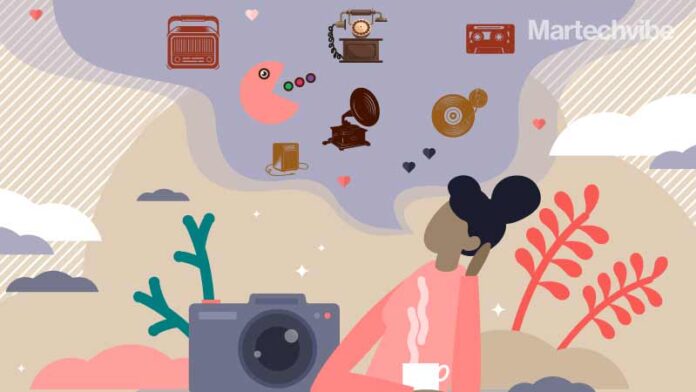 Nostalgia triggers happy conversations and warm thoughts. And of course, brands are listening. For years, marketers have used nostalgia to create a stronger relationship with customers who soak in the memories of the ‘90s, with perhaps a bottle of Areej in their hands.

Why the Sudden Interest?

Cable TV entered the living room after the ‘80s and even then, there was no nostalgia-driven marketing as it was hardly necessary. Things were only just beginning to change for consumers.

Then came the internet, taking the world by storm, followed by smart devices that created an entire media ecosystem, and a modern world began to crave for the vintage factor — from arcade games, gramophones and vinyl records, discontinued food and beverages to old TV shows.

Decades ago, nostalgia was considered odd. But when the actual emotion was understood later, a new advertising chapter took off. Marketers jumped at the opportunity and toyed with the idea of nostalgia in their campaigns. From Target, Adobe, Freia, Nike, Tesco, Microsoft and Apple to the Australia Tourism Board, companies began to feature nostalgic elements. Fast forward to now when the world is reeling due to the pandemic and its impact on businesses.

The last two years have been laced with nostalgic vibes, mainly due to the pandemic-driven lockdowns, social distancing, along with death and suffering. “Generally, people find comfort in nostalgia during times of loss, anxiety, isolation, or uncertainty,” said Psychology professor Krystine Batcho. The University of Southampton also revealed that nostalgia makes people optimistic about the future. As a result, brands have been frantically leveraging elements of the past to provide empathy, comfort, and also add sentimental value to their products.

The Journal of Consumer Research reported that this type of advertising makes consumers more willing to spend money on the goods and services as it offers immediate return in the form of happiness and comfort.  Calling nostalgia marketing an advertising equivalent of comfort food might just be accurate.

The Secret Sauce to Nostalgia Marketing

While several brands incorporate it in their strategies, only some succeed in creating a massive impact. Experts believe that the only way to stay ahead of competition and garner success is to pair nostalgia with the wide array of technology that is available. Working on a simple video advertisement featuring an old Beatles’ song or a group of friends on a road trip to Hili Fun City in Al-Ain would not cut it. Hitting the right balance of nostalgia and modernity is the radical marketing strategy that brands need today.

Social media campaigns are known to boost sales and generate leads. Adding nostalgia to the campaign and the buzz it creates on the internet can become viral content, raising brand loyalty and sales exponentially. #ThrowbackThursdays could become a popular advertising content, where brands post pictures and videos from the yesteryear. Nostalgia-driven UGC content can boost campaigns with emotional responses. For instance, Pepsi once posted a Throwback Thursday post that pulled in a significant amount of reaction on Twitter.

Another example comes from the Pizza Hut marketing team. It decided to use the classic game of PAC-MAN to engage the older generation with nostalgia, and the younger generation with their love for games and retro elements. The brand’s Newstalgia campaign involved an AR game where customers could win a custom PAC-MAN game cabinet. All they had to do was order a large pizza, scan the QR code, play PAC-MAN, and share their score on Twitter with the hashtag  #PizzaHutARcade. The brand also roped in Actor Craig Robinson for their nostalgia-driven advertisement where he is seen playing the game, while enjoying a pizza.

When Coca-Cola launched their new flavours – cherry vanilla and orange vanilla, they leveraged 3D technology and a hint of nostalgia to promote them in 2020. They inserted images of the new flavours in the hands of NCAA basketball players, mascots, coaches, and fans during some of the most iconic moments in the tournament’s history.  By invoking sports victories nostalgia through the use of technology, when live filming was not an option, brought the brand great success.

Not many companies have leveraged the combination of nostalgia and technology to innovate revolutionary marketing and advertising strategies. Experts strongly urge marketers to introduce new products laced with nostalgia elements and portray them through a technological medium. It can lead to a massive surge in lead generation and brand valuation.

Consider Netflix’s Stranger Things as a nostalgic advertisement. The web series was thick with ‘80s music, fashion, and gadgets and brought millions of people to the Netflix platform. As much of a success as it was, the show also released a YouTube video that allowed viewers to experience the show in virtual reality. The video hit over a million views. The extraordinary success of Pokemon Go was also a shout out to the immense potential of the combination of nostalgia and technology.

Also Read: The Brick and Click Blend for Retailers

Celebrating nostalgia in a technology-driven world

Today, there are over five billion mobile phone users and over three billion social media users, with information just a tap away. Some experts opine that the technological advancements have reduced the spontaneity that was once a core characteristic of nostalgia. Yet, the silver lining remains that the modern lifestyle is inspiring a revisit to simpler times. The nostalgia marketing trend is taking a new shape as technology matures and a generation of digital natives become the consumers.

With the dramatic advancements of technology, nostalgia marketing can feature memories of just a few years old that have an equally emotional impact as that of a childhood memory. With shorter timeframes, even the audiences have expanded to include GenX and GenZ. For instance, Pokemon Go combined the 25 year old Pokemon nostalgia with augmented reality to include people of all ages and generate massive leads.

Finally, brands are also beginning to merge nostalgia with digital products. Consider The Moto Razr that shares the old name but now comes with 5G, Carvaan, a music device that looks like a transistor radio and holds classic tunes but comes with Wifi and Bluetooth connectivity, or Samsung’s latest touch-flip phone that carries the nostalgic memories of a classic flip phone.

While nostalgia was first discovered in the 17th century by Johannes Hofer, a new, or ratherspin-off took shape during the COVID-19 pandemic called Postalgia.

The sudden helplessness of being unable to meet people or go outside triggered a different emotion – a nostalgia for tomorrow that felt like yesterday. It is as simple as understanding the emotions of a child wanting to go back to school and meet his friends or a travel writer wanting to hit the road again for another adventure. While marketers have been leveraging nostalgia marketing, they should also consider postalgia. It is not a temporary situation that will fade away once the world is out of the pandemic trouble, but it can be a seasonal marketing strategy that attracts customers. For instance, a postalgic social media campaign of a beverage brand that reminds the world about the smell of mangoes during the winter. It can make the prospective customer nostalgic about the future. For instance, Pepsi’s The Mess We Miss advertisement campaign got it right.

Nostalgia or Postalgia, marketers are certainly shifting gears in their new role in the marketing and communication industry. Companies worldwide are beginning to take a bet on the past for better future results, and we cannot be more excited for the possible innovations.

A VR concert of the Rolling Stones…

Or a Papy Snack-themed party …