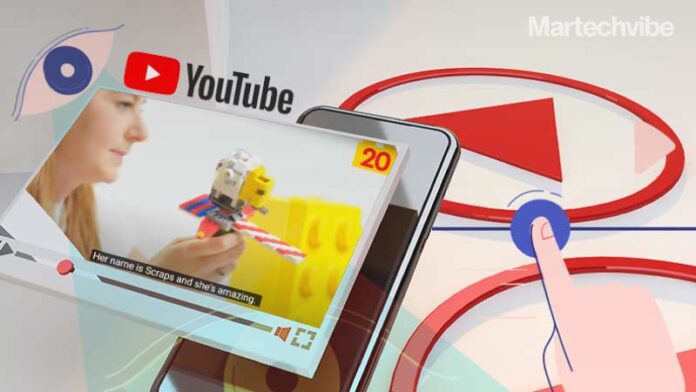 An average person spent 100 minutes each day watching online videos in 2021, up from 84 minutes in 2020. With these numbers in place, no wonder marketers are striving to make themselves heard and seen on their dedicated YouTube channels.

French footballer Thierry Henry, an assistant coach for the Belgium national team, recently participated in the LEGO 90 seconds challenge on Lego’s YouTube channel. In a three-minute video, Henry shared his joy of co-creating with his kids and reminisced his association with the brand starting from his childhood days. This video on the brand’s YouTube channel earned more than 100,000 views. His video is part of the series #Lego90years. Other celebs Alicia Keys, YouTuber and inventor Simone Giertz, and International dance, music and fashion icon Peggy Gou tried their hand at Lego creations as part of this series, each generating more than 100,000 views. The toy manufacturer’s YouTube channel has a whopping 15 million subscribers.

In the age of cord cutting, when paid T.V. audiences voluntarily withdraw themselves from subscriptions, brands are reaching out to consumers where they are, i.e., on online video channels.

Recently, Zenith’s Online Video Forecasts report highlighted that an average person spent 100 minutes each day watching online video in 2021, up from 84 minutes in 2020. The increasing online video consumption makes it a powerful platform for brands to make it an integral part of their marketing strategy. According to Cisco, online videos will make up more than 82 per cent of all consumer internet traffic in 2022 — 15 times higher than in 2017.

MENA region is not behind in the consumption of online videos. MENA’s millennials spend over three hours daily on online video, more than messaging apps and games. In KSA and the UAE, 68 per cent consume more video digitally than they do on T.V., with 77 per cent watching YouTube every day in Egypt. No wonder, Middle Eastern brands are catching up fast with their global counterparts. Majid Al Futtaim, a retail giant, has a dedicated YouTube channel having 120,200 subscribers.

Today YouTube has become the best content streaming service any marketer would not dare to ignore. This social media platform sharing online video content started its journey on 23 April 2005. YouTube co-founder Jawed Karim uploaded the first video Me At The Zoo, using Karim’s camera and posing in front of two elephants in a San Diego zoo. The video had 18 second running time. But within a year, knowing its potential, Google announced it was paying $1.65 billion for the service.

YouTube cuts a large portion of the advertising budget of marketers- it recorded $7.34 billion in ad bucks in the second quarter that ended in June 2022. The online video-sharing platform’s ad revenue grew by 4.8 per cent in Q2.

According to Google, by 2025, half of the viewers under 32 will not subscribe to a pay-TV service. Considering this, brands creating video content on these social media platforms focus on what makes their brand unique and create videos around it. Sports brands like Nike feature elite athletes, celebs narrate their association with toy manufacturers, and GoPro users share their adventure experience using the gear and videos. Brands worldwide are not just sharing the content their customers are interested in but are creating native content for their platforms and engaging influencers to further their goals. As brands may have fewer subscribers than influencers, brands are engaging influencers targeting their customer profiles to reach probable customers and retain and engage with existing customers.

YouTube boasts 22.8 billion visitors a month, which makes it the second most visited site in the world after Google. Apart from being an entertaining platform, it is an effective marketing tool, and enterprises effectively use their YouTube channels for advertising. These channels promote products, help brands buy and retain a customer base, and increase a brand’s sales volume. Brands use it as an effective marketing channel by optimising keywords in titles, adding commentary, product reviews, and video listicles. These videos appear in Google searches, giving enterprises more visibility and an opportunity to attract more prospective customers. So knowing this, more and more brands are creating their dedicated channels, researching their target markets and conducting competitive analyses. Brands are posting video content based on the YouTube algorithm.

Back 2014, Google and YouTube Back in 2014, Google and YouTube created a strategy for videos or podcasts known as Hero, Help, Hub. As the name suggests, the strategy is about three types of content YouTube, Google named hero content, help (or hygiene) content, and hub content. While the hero content is the biggest and broadest, and it is all about reach and brand awareness. Hub content aims to keep subscribers and provide quality content for them (aka community building). At the same time, help content is smaller in scale and revolves around getting new subscribers. For running a successful YouTube channel, just coming up with a topic and sharing a video is not enough. Several martech tools like TubeBuddy, VidIQ, YouTube Studio, YouTube Audio Library, and Social Blade help brands develop native content for these channels. While TubeBuddy is a browser extension for Chrome, Firefox, and Opera with more than 60 features designed to manage YouTube channels easily. TubeBuddy includes features for keyword research, tags, productivity, analytics, bulk processing, and video SEO. While with YouTube Studio, one can upload videos, get channel analytics and performance insights, and get video snapshots. This app is also available for iOS and Android giving the flexibility to manage content from mobile. Similarly, the YouTube Audio library boasts a bank of royalty-free songs and sounds.

According to Google, 60 per cent of viewers in MENA are millennials, comprising YouTube’s most influential Middle Eastern audience, second only to the U.S. when it comes to time spent watching online videos. Saudi Arabia alone is the biggest user of YouTube per capita worldwide. With these statistics in place, UAE enterprises strive to develop dedicated content on YouTube. In the days to come, martech enabling brands to give visibility on this online platform will witness a boom.

If you liked reading this, you might like our other stories
Martech Spaces: LinkedIn’s Power Over B2B Marketers
Women in Martech to be Recognised at VMF