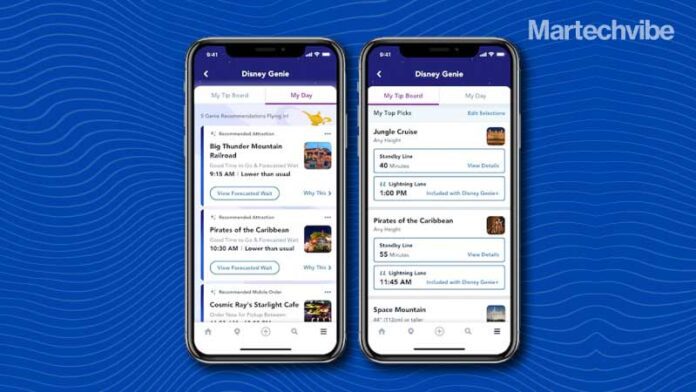 Disney provided reporters a preview of Genie during the company’s first big update on the system since its announcement in August. Genie’s creators showed the app as it appeared in its final testing stage, although details may change before the public release.

Genie’s base service is designed to help visitors maximise their time at Disney’s parks by recommending the best times to ride attractions and dine to avoid crowds.

Visitors select their must-do attractions, restaurants and experiences, and Genie compares the availability of those options with the user’s existing plans to suggest itineraries. Its algorithm allows for changes due to things like guest preferences, ride closures and inclement weather.

Genie itself is free, but visitors can pay $15 a day for Genie+, whose primary feature is skip-the-line attraction reservations. Its Lightning Lane reservation system has caused contention since Disney confirmed it was replacing the free FastPass+ service.

Genie was designed to appeal to all Disney World visitors, from first-time guests to diehard fans. The service demonstrated this week showed Genie on the home screen of the My Disney Experience app. Visitors using Genie first select the number of attractions they want to ride. In the preview, users were limited to choosing eight.

The next screen allowed visitors to tell Genie their interests to select from additional experiences. Categories included “Disney favourites,” like princesses, villains and pirates; “Park interests,” like character meet and greets events and tours, park classics and seasonal experiences; and in-park “Dining interests,” like character dining, casual eats and fine or “signature” dining.

Genie then asks if users need information on height requirements or accessibility accommodations for rides and experiences — selections that, if toggled, appear underneath ride information on the suggested itinerary.

Afterwards, users are given the option to pay for Lightning Lane to access specific rides. The first options given include the attractions priced “a la carte,” or per person, per ride. Visitors can choose up to two of these per day, and their price varies daily. Sample prices for Genie’s launch date, a Tuesday, included $15 for Rise of the Resistance, $10 for Seven Dwarfs Mine Train, nine dollars for the recently opened Remy’s Ratatouille Adventure and seven dollars for Expedition Everest.

The next step lets guests with Genie+ choose a selection to skip the line at specific rides. Genie+ users can generally only hold one of this type of Lightning Lane selection at a time, but they can keep two if the next available time for the second attraction is longer than two hours away.

The service’s interface looks similar to how Disney World’s former FastPass+ selections worked, and the system operates similarly to how MaxPass works at Disneyland.

The itinerary also includes suggested additions based on the user’s selected interests. If a user changes their plans or vetoes a suggestion, the program readjusts the schedule. Genie continuously updates its recommendation if the algorithm finds better options.

Visitors planning to park hop later in the day can also plan for their time at the next park after two p.m., but guests don’t have to scan into the next park beforehand. The park hopping screen asks them to input their estimated arrival and departure times at the next park, and the selection process begins again.

Genie also includes a “tip board,” which shows the actual and forecasted wait times for attraction standby lines and offers suggestions on whether Lightning Lane options would be more efficient. There’s also a dining tip board that can show the next available times for restaurants and mobile ordering.

A virtual “cast member chat” within the app can help with planning issues or problems linking tickets or park passes.

The paid tier of Genie+ will also launch with about 20 AR lenses, similar to Snapchat or Instagram filters, that turn guests into characters like Genie or various Disney villains. More than 40 “audio tales” within Genie+ provide background on the park and details on popular attractions.