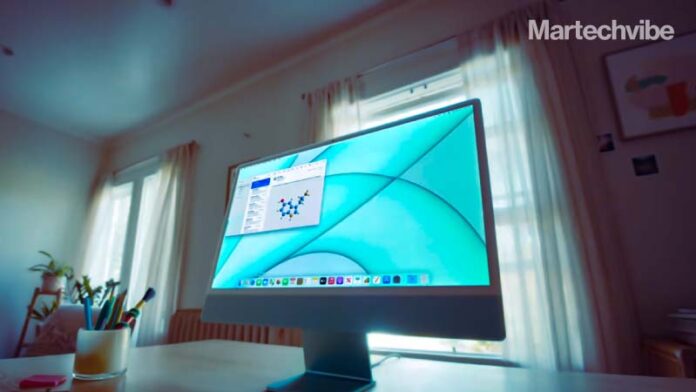 Apple just held its first product launch event of the year, where it announced a colourful new iMac and an updated iPad Pro with 5G and the M1 chip that’s also used in the company’s desktop computers.

Walking around Apple Park, Apple’s campus in Cupertino, California, Apple CEO Tim Cook kicked off the event with factoids about Apple’s environmental efforts, saying that Apple is carbon-neutral and hopes to remove 1 million tons of carbon from the environment per year.

Investors didn’t appear to be impressed by the news. Shares of Apple were down about 2% after the product event wrapped up.

Apple said on Tuesday that it will release new high-end iPad Pros that use the company’s M1 chip, which is also used in its Mac computers. Previously, iPads used A-series chips, which are what powers the company’s iPhones. Apple says it is the most powerful tablet on the market.

It also includes an improved USB-C connector that will allow the iPad to connect to higher-resolution monitors and download images from a camera more quickly.

The 12.9-inch iPad Pro features an improved screen using an array of LEDs that is brighter and has better colour resolution than previous displays using a technology called Mini-LED.

The iPad Pro will also have a 12-megapixel front-facing camera with an ultrawide lens that can automatically pan to keep human subjects in the shot.

These iMacs are powered by Apple’s custom M1 silicon, not Intel processors. The computers have a new, thinner aluminium design, and they come in red, blue, purple, orange, yellow, silver, and green. The new thinner design looks a lot like a big iPad.

Apple says the volume of the computer has been reduced by 50%, resulting in a smaller computer that can fit on a desk more easily. It comes with a 24-inch built-in display and an improved camera that can record 1080p video in low light. Apple says the display runs at “4.5K” resolution.

It ships with a new magnetic power connector reminiscent of Apple’s previous MagSafe laptop chargers and a slightly updated keyboard with an emoji key and a fingerprint sensor. Apple’s mouses and keyboard come in the same colours as the new iMacs.

The entry-level model costs $1,299, and an upgraded version costs $1,499. The new iMacs will go up for preorder on April 30 and will ship in the second half of May, Apple said.

The Apple TV finally has a brand-new remote

Apple is finally rolling out a new, redesigned remote for the Apple TV. It’s made of aluminum and has dedicated buttons for navigating menus, which should solve some of the headaches caused by the earlier remote. It will ship in the second half of May with the new Apple TV 4K, which costs $179 or $199 depending on the model.

Apple announced that its Apple TV 4K box has been updated with a new processor, and it will be able to handle high frame rate HDR video which will result in displaying smoother, more colorful sports events.

It will also include a new feature that will use the iPhone’s camera to tune the TV’s picture quality.

It also comes with a completely redesigned remote made of aluminum with physical buttons, instead of the old remote’s touchpad. It can also control your TV’s power. Instead of a touchpad, it has a wheel for controlling the display.

It starts at $179 for 32GB of storage. It goes up for preorder on April 30 and will start shipping in the second half of May, Apple said.

Apple announced AirTag, calling it an iPhone accessory, priced at $29 for one or $99 for four. It will be on store shelves on April 30.

It uses Apple technology called Find My, which uses a network of iPhones to find lost objects. It’s using a technique Apple calls ‘precision finding’ that it says is privacy-sensitive.

Each round AirTag is small and lightweight, features precision-etched polished stainless steel, and is IP67 water- and dust-resistant. It has a built-in speaker that plays sounds to help locate AirTag, while a removable cover makes it easy for users to replace the battery. The device features the same setup experience as AirPods

This product has been the source of some scrutiny from lawmakers who have heard that Apple is privileging its own lost-item trackers over others’ using anticompetitive practices and access to the iPhone operating system. Find My opened to third-party accessory makers last month.

Also Read: Are You Ready for a Virtual Ramadan?

It goes up for preorder on Friday and will ship on April 30.

Apple announced that it’s launching its podcast subscription service next month, putting itself up further against Spotify and other competitors in the audio streaming wars.

The company is also redesigning its Apple Podcast app.

CEO Tim Cook said Apple will allow partners and spouses to share a credit line on a credit card, allowing both people to build credit scores. It’s also introducing features for families and teenagers. Apple was notably under fire from co-founder Steve Wozniak after people discovered that sometimes spouses had different credit limits.