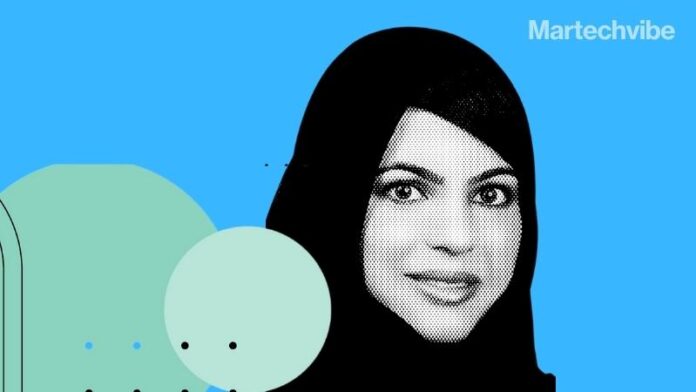 In today’s digitised world, data is the cornerstone of media and communications. Discussing the age of Data-driven Media & Communication at the Vibe Martech Fest was Taghrid Fawzi Alsaeed, Head of Media Intelligence & Innovation Group Comm, Mubadala.

Taghrid Alsaeed who joined as a special project manager in 2011 has overseen several projects over the years. In 2015, she was appointed as SVP of special projects where she took the lead on multiple projects such as communications advisor to Cognit, JV of IBM and Mubadala, Executive Director of Special Olympics World games in Abu Dhabi and project director under the Executive Office of Abu Dhabi Government.

With a goal to to support and enable the team in group communications and accelerate their progress in appropriate ways with the best new technology and data sources, one programs them into user friendly tools providing rapid, real-time monitoring analysis and decision making.

Additionally, being the co-founder of Eight Creative Technology, a Khalifa Fund’s first initiative focused on digital innovation and creativity, Alsaeed talks about the Mubadala Command Centre Studio, a physical space equipped with the latest tools and technology to protect and promote mubadala’s reputation 24/7.

“It will act as a think tank and newsroom creation hub leveraging timely news, media monitoring and analytics, publishing, campaign management, SEO, crisis communication , market intelligence and cybersecurity,” she said. The digital studio will serve as a platform for audio, photos and video shooting in a virtual environment.

Presenting cutting edge MarTech solutions with a practical approach, Vibe Martech Fest (VMF) is presented by Sprinklr and hosted by Martechvibe – the region’s only and world’s fastest-growing MarTech media brand. The other key event partners include Tealium, Sitecore, OneTrust – PreferenceChoice, SAP, and Merkle. The media partners are EnterpriseTalk, Talk CMO, and ITSecurityWire.